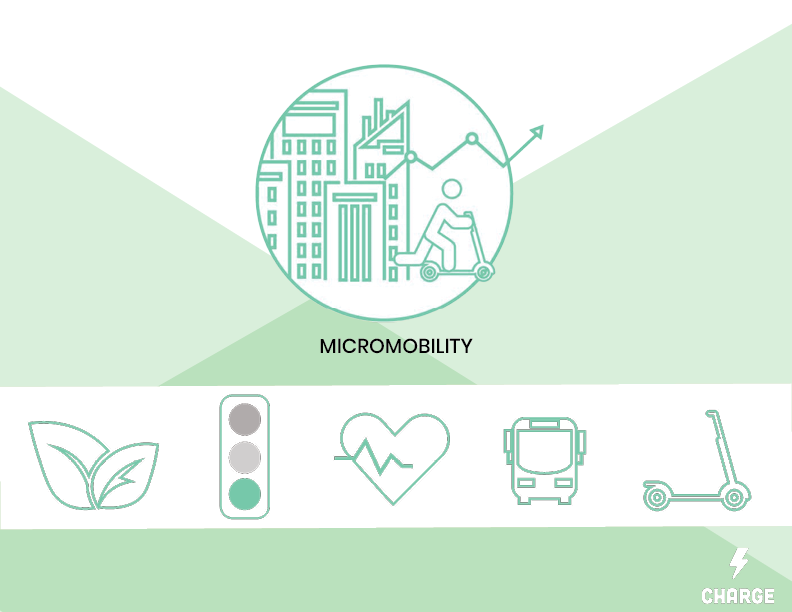 The micromobility movement has taken the world by storm. Cities around the globe continue to embrace micromobility as an option to ease pressures on public transportation and congestion – particularly as urban areas continue to grow. According to recent research, over half of the world’s population now lives in urban areas, and that could almost double between 2015 and 2050. Cities simply cannot keep up with the growing transportation needs of their expanding populations. Public transportation and congestion suffer every day to keep up with demand. However, key developments in urban transportation – such as new market trends like electric scooters and electric bikes – could ease the tensions for many cities today.

What is micromobility, and how can cities adopt these new solutions to improve urban transportation in their communities?

Micromobility is the transport of people using one- or two-passenger vehicles weighing less than 500kg. The term was first coined by industry analyst Horace Dediu  in a 2017 speech he delivered at a summit in Copenhagen. Since then, the term has taken on a bigger meaning and a life of its own. Numerous micromobility solutions are available in metropolitan areas across the globe today, including electric scooters, electric skateboards, shared bicycles and electric pedal assisted bicycles.

Mass transit is still the most effective mode of transportation in urban cities, particularly for longer distances. The issue commuters face is the “last mile”, or the distance between city transit drop off and one’s final destination.

Roughly 60% of trips in cities are 5 miles or less. With such a short distance, having access to smaller vehicles assists with relieving traffic congestion. Roads in many urban areas are extremely congested, and cities are looking for innovative ways to expand the infrastructure of metropolitan areas and better connect people to their destinations. Over the past decade, traffic congestion has continued to increase globally, with nearly 75% of cities in the index reporting increased or stable congestion levels between 2017 and 2018. Micromobility solutions have the potential to drastically decrease road congestion in urban areas by providing reliable alternatives to cars.

According to the U.S. DOT, transportation is the second highest expense for households after housing itself. Without the hassle of the upfront purchase and maintenance of owning a small vehicle, the idea of “renting” a shared vehicle for a fraction of an Uber ride has accommodated many commuter expenses. Micromobility holds promise in connecting communities with more affordable and reliable transit options, providing sustainable commute options for all.

As populations in urban cities continue to grow, passenger transportation will increase threefold between 2015-2050, representing an exponentially increasing carbon footprint. In fact, emissions data has shown that transportation is the top source of greenhouse gas pollution in the U.S. E-scooters and other micromobility solutions can cut down on these greenhouse gas emissions, decreasing a community’s carbon footprint with more efficient means of transit. If globally embraced, there could be a 30% decrease in CO2 emissions from urban transport by 2050.

For all of the benefits of micromobility solutions, the potential risks must also be factored into cities’ decisions to welcome these new modes of transit. For example, speeding and reckless riders pose a danger for pedestrians when micromobility is misused, bringing to light the importance of education for new riders. In some cases, there may also be potential fire risk for chargers, also known as “juicers,” who are paid to bring e-scooters back to their residence for charging. Furthermore, micromobility solutions may not always be easy to find or always charged to its capacity, causing frustration to travelers and commuters.

Cities have suffered growing pains as they work to embrace these new transportation methods, including the unprepared and depleted urban infrastructure of their own cities. A prime example is cities without bike lanes. Without them, there isn’t enough room on city streets for pedestrians and micromobility vehicles to navigate without causing safety concerns. In addition, the rise of dockless e-scooters has resulted in cluttered streetscapes, leading to inaccessible sidewalks and streets, particularly for those with disabilities. Furthermore, some neighborhoods are currently excluded from micromobility in big cities, either due to a lack of available infrastructure or regulations prohibiting use. Without proper infrastructure in place, micromobility may pose a liability issue for cities, which has resulted in stricter restrictions and even outright bans in many cities.

As the world struggles to harness the potential of micromobility while addressing issues of safety, accessibility and regulation, Charge is dedicated to empowering cities to welcome micromobility responsibly. At Charge, we are focused on building the largest global network of electric charging, storage and service stations for micromobility. We provide vital infrastructure for riders and micromobility operators by offering a convenient place to charge and store e-vehicles, helping protect the integrity of city streets and keeping pedestrians and residents safe.

Interested in learning more about Charge? Get in touch!